The Frankfurt Declaration of Christian and Civil Liberties 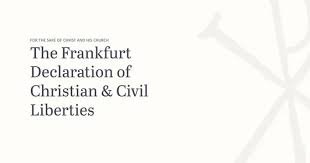 One of the greatest benefits of the gross government overreach associated with the lockdowns was that it has forced Christians to re-evaluate our views of the place and role of the state in society. This re-evaluation has been especially conducive to identifying the degree to which contemporary Christianity has adopted the heretical Marxist view. Statism is as big a threat to Christian orthodoxy and orthopraxis as almost any heresy in church history. As Christians around the globe are beginning to wake up to the reality of totalitarianism and the need to resist it, necessary statements and declarations have started to arise in the same way that the creeds and confessions of the church historically arouse in response to heresies threatening Biblical teaching and practice. The most recent and certainly the most thorough of these is The Frankfurt Declaration of Christian and Civil Liberties.

The declaration is structured like a confession of faith, and consists of an introduction, five articles of faith, and a conclusion. The truths affirmed by the five articles are 1) that God is the Sovereign Lawgiver and Judge of all mankind, 2) God is the Source of all truth, including scientific truth, 3) mankind is made in the image of God and derive their value and rights from their proper place in God’s creation, 4) that all human authorities, in deriving their authority from God alone, have their jurisdictions limited by God’s law, which means that the state has no right to usurp the jurisdictions of the family or the church, and 5) a confession regarding Christ’s Headship of the Church. The Declaration concludes with a call to repentance as well as the courageous and vigilant resistance of government tyranny.

The full text of the declaration, which is already available not only in English, but also in Czech, German, Spanish and French, can be found at frankfurtdeclaration.com. The Pactum Institute urges churches to evaluate the declaration for the purpose of potentially adopting it as a position paper or confessional standard.

Doug Wilson, the Pactum Institute and Ethnic Complementarianism
Pretoria Conference on Church and State a Major Disappointment
Liz Cheney’s defeat is truly worth celebrating, even if Harriet Hageman’s victory isn’t